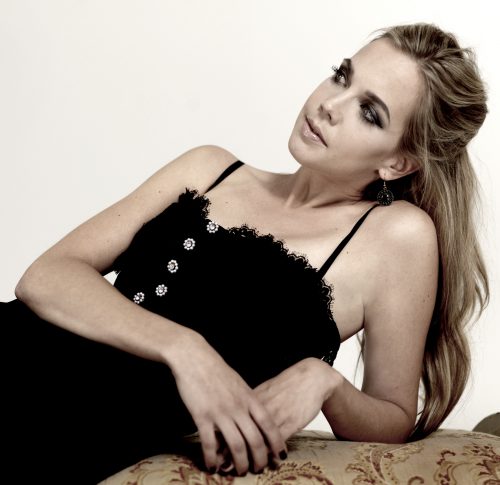 Mojca opens the 2016-2017 season with a special concert at the Bilkent Concert Hall in Ankara, Turkey on October 8. The German soprano joins conductor Avi Ostrowsky for a program of Mozart, Strauss, and Shostakovich. Known for her interpretations of Mozart, Mojca then reprises the role of Susanna for five performances of Le Nozze di Figaro at the Gran Teatre del Liceu in Barcelona. Performing under the baton of Josep Pons, Mojca sings alongside Gyula Orendt as Count Almaviva, Olga Mykytenko as Countess Almaviva, and Kyle Ketelsen as Figaro. The Gran Teatre del Liceu and Welsh National Opera coproduction opens November 7 with subsequent performances on November 12, 14, 16, and 19, 2016.

Mojca continues the winter season with a concert with the Kuss Quartett at Berlin’s Ultraschall Festival on January 20, followed by a recital on January 31 at the Wiener Saal Mozarteum in Salzburg, Austria, with trombonist Mike Svoboda as part of the Mozartwoche Festival. Mojca sings „Spazio immergente,“ a new work by Beat Furrer.

A frequent muse of Wolfgang Rihm, Mojca celebrates the work of the German composer during the month of March. She sings a world premiere of „A Requiem“ with Mariss Jansons and the Symphonieorchester des Bayerischen Rundfunks in two concerts on March 30 and 31 in Munich, and again on April 8 at the Culture and Convention Center in Lucerne, Switzerland.

The German soprano concludes the season with a series of concerts in Germany and Switzerland. Mojca appears with Risto Joost and the Württemberg Chamber Orchestra on April 26 and 27 for performances of Eller, Schubert, and Korngold. In a series of concerts at the Tonhalle Zurich in May, Mojca joins French conductor Lionel Bringuier, the Tonhalle-Orchester Zürich, and tenor Christian Elsner for three evenings of Mendelssohn’s Lobgesang, which she can be heard singing in a 2010 recording. Closing out the season, Mojca performs a recital with the delian::quartet at the Konzerthaus Berlin on June 26 followed by a concert of Luigi Nono’s „Il canto sospeso“ at the Konzerthaus Freiburg on July 8 with Peter Rundel and the SWR Symphony Orchestra.